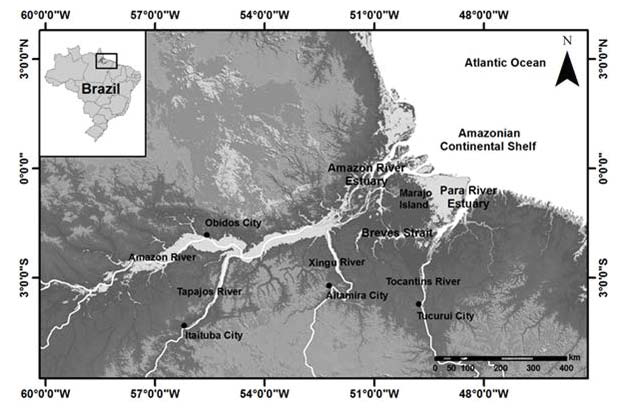 Hydrodynamic modeling can be applied to any water body. Thus, modeling was used in one of the largest rivers in the world, the Amazon River! In addition to it, the Tapajós River, the Xingu, and the Tocantins were also included in the model developed by Borba & Rollnic (2016). This set of rivers was called the Pará-Amazonas River System, located in the Pará state.

Hydrodynamic modeling can be realized through several programs, such as MIKE, SisBaHiA, Delft 3D, among others. In developing the Pará-Amazonas River System model, Delft3D was used. To be able to acquire the model data, the authors added five cross-sections (L1 to L5) to evaluate the fluvial discharge in this estuarine system. The location of the 5 sections in the mesh for the discharge quantification.

From this, the authors observed a circulation pattern between the system channels. Sections L1, L4, and L5 have runoff towards the ocean. Sections L2 and L3 showed the direction to the upstream.

This information is extremely important for the management of this environment, as it shows what the behavior of a harmful particle in the system would be. That is, depending on which channel the problem occurred, the harmful particle could be taken upstream or into the ocean.

Do you want to know more? Join OCA Academic! There you will find all the works produced by our team and researchers from Amazon.